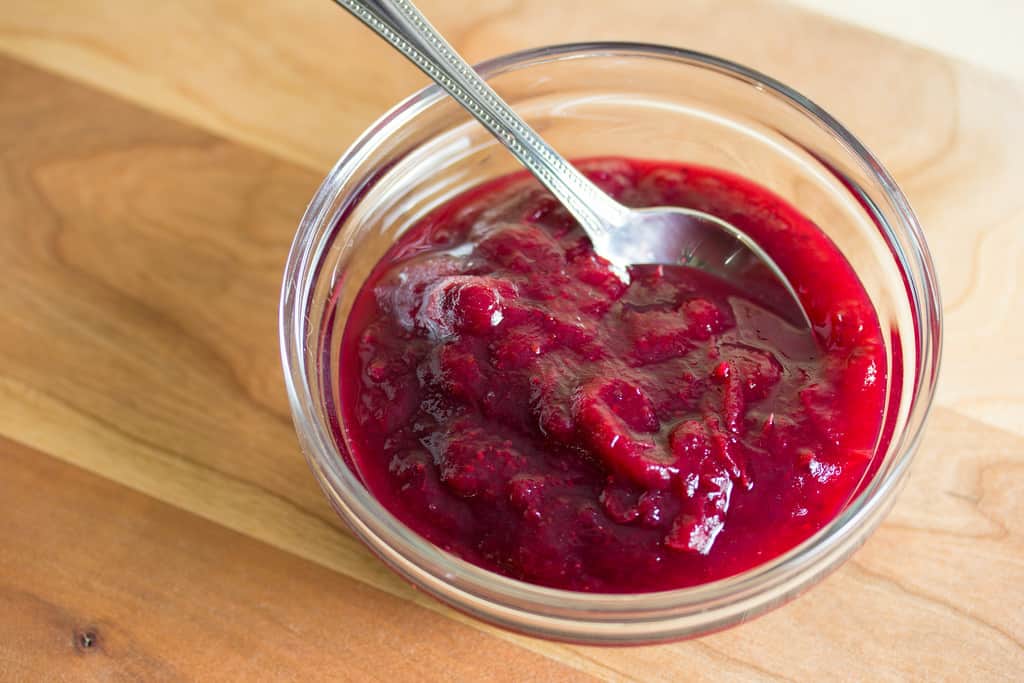 Cranberry sauce has always been one of my favorite holiday-season foods. With so many amazing health benefits, cranberries (and the other ingredients in this recipe) deserve a spot on the table way more than once or twice a year. When I realized one of the first ingredients in the classic American canned version is corn syrup, I was heartbroken. Fortunately, cranberry sauce is super simple to make from scratch and it tastes amazing.

Each of the four ingredients in this recipe is brimming with phytochemical superpowers.

PACs and other cranberry flavonoids have also been shown to have significant anti-cancer properties including inhibiting the growth and proliferation of breast, colon, prostate, and lung cancers along with other tumors [2].

Cranberries are also one of the top fruit sources of quercetin. Quercetin is another flavanoid that has anti-inflammatory and antioxidant effects as well as some reported benefit for cardiovascular health [3].

Oranges contain a robust profile of bioflavonoids that have been shown to have anticancer, antioxidant, cardiovascular, and anti-inflammatory effects [4]. Citrus flavonoids also have short term and long term effects on the brain. They have been shown to increase brain function within two hours of consumption and play a positive roll in preventing several degenerative brain diseases [5, 6]. Orange peel has antioxidant and anti-inflammatory properties of its own. Orange peel, also called Chen Pi in traditional Chinese herbal medicine, inhibits cyclooxygenase (COX-2), which is the same mechanism that makes ibuprofen and other NSAIDs effective anti-inflammatories [7].

Honey provides a nutrient-dense sweetener that has antioxidant, anti-inflammatory and antimicrobial properties. In fact, it has even been shown to help in the treatment of numerous diseases such as diabetes mellitus and those affecting respiratory, gastrointestinal, cardiovascular, and nervous systems [8].

This is by no means an exhaustive list of the health benefits of cranberries, oranges, and honey. But, it’s certainly enough to have me convinced that cranberry sauce is more than just a holiday treat.

Ways to Eat It

Cranberry sauce is delicious on pork, turkey, and roast chicken. It also makes a great addition to a Chia Seed Breakfast Bowl or can be spread like jam. I love it on a rice cake with nut butter.

Doubling this recipe is almost always a good idea, especially if serving more than 4-6 people or you want leftovers.

This recipe stores well in the fridge. It can even be canned using a water bath method for shelf storage like most jams.